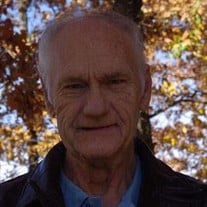 On Wednesday, May 01, 2013, he married Jacqueline A. Smith nee Donnelly Knox at Greenville, Illinois, who survives.

He was a member of Holiday Shores Baptist Church and the Boilermakers Local 363, Belleville, IL.

Sidney was born at East Saint Louis, Il, he grew up there attending East Side High School. After graduating he worked with his grandfather in the Stockyards at E. St. Louis. After a few years, he joined the Boilermakers. He was a Foreman on many jobs in the Metro-East. Eventually he opened Midwest Boiler Repair, a business he retired from in the early 2000’s. Sid enjoyed gardening and barbequing. Camping and boating were fun advocations. Best of all, he loved to make and drink Strawberry Milk Shakes.

Faith was an important portion of Sid’s life. He was an avid Bible reader, church was important to him,

He was preceded in death by:

Arrangements are being handled by Spengel-Boulanger Funeral Home in Highland, IL.

There will be a Private Family Memorial Service.

Memorial contributions may be made to Holiday Shores Baptist Church.