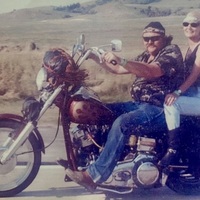 Visitation will be held 2:00-4:00 PM – Saturday, April 30, 2022, at the Meyer Funeral Home in Newton, Illinois.  In loving memory of Murf, memorials may be made to Jasper County Cancer Fund PO Box 333 Newton, Illinois 62448.  The obituary can be viewed and condolences left at www.meyerfh.com.

Charles Willis, better known to his family and friends as “Murf” was born on May 18, 1953, in Fairfield, Illinois, the son of John and Martha (Prine) Jamerson.  He married Nancy Cox on September 25, 1976, in Newton, Illinois.

Murf served his country in the United States Air Force from November 6, 1972 till March 25, 1974, during the Vietnam War.

Murf worked as general/foreman boilermaker for over 40 years with the Boilermakers Local Union #363.

Murf was a member of the Falmouth United Methodist Church, Jasper Post #20 American Legion and Veterans of Foreign War #7537 Harvey A. Pulliam Post.

Murf was enjoyed hunting, music, 4-wheeler riding, the outdoors and was avid a motorcycle rider, traveling all other United States.  Most of all he enjoyed his time with his family, especially his grandchildren.

Murf is survived by:

Papa to many others