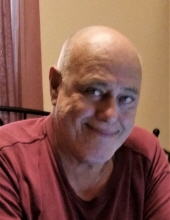 Though he was born in Chicago, his family moved to Oblong when he was three years old, and this was where he spent most of his early years. He would eventually get on with Briggs Pottery in Robinson, IL, where he faithfully worked for many years before they closed their doors. He then found work as a boilermaker and was a member of Local #363 (member since 01/12/2008). Away from work, Boomer could often be found out on the road riding his motorcycle. Whether he was at home or about town, chances were that his dogs were right by his side. They, by all accounts, were a great source of joy in his life, as were his beloved Chicago Bears. Much of his retirement found him on top of his riding mower, and he loved tinkering both in the yard and in his garage.

Boomer lived with a sense that more was always better. Anyone who knew him could attest to the fact that he lived life to its fullest. Simply put, he lived it his way.

A funeral service will be held at 1:00 p.m. on Tuesday, December 10th at the Goodwine Funeral Home in Robinson with Pastor Phil Boyd officiating. Burial will be held at a later time at the Mound Cemetery.

To send flowers or a remembrance gift to the family of Boomer Ryan Pimentel, please visit our Tribute Store.