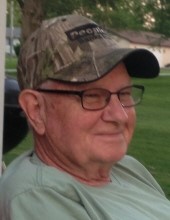 William W. “Bill” Stinson, 78, of Ramsey passed away Wednesday, October 9, 2019 at Heritage Health—Pana. He was born March 9, 1941 in Lake City, IL, son of the late John Harvey & Alberta (Williams) Stinson. Bill married Anita Louise Boyer and she preceded him in death on February 10, 2017.
Bill was a graduate of Lovington High School before working as a boilermaker out of the Local #363 in Belleville. In his early years, he enjoyed working on race cars. He also loved everything about guns, telling stories and spoiling his grandchildren. He was an avid St. Louis Cardinals fan.
Bill is survived by his children: Clayton (Teri) Stinson of Pana and Kristi (Alan) Hard of Nokomis; grandchildren: Lucas Stinson, Kirsten Cravens & Marissa Cravens and 2 brothers & 2 sisters.

A graveside memorial service for Bill will be held on Monday, October 14, 2019 at 11:00 a.m. in Twin Pines Cemetery, Pana with James Davidson officiating.