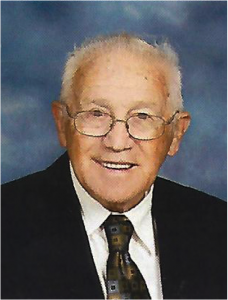 John David “Jack” Thompson, 97, of Mount Vernon, Illinois passed away at 3:45 P.M. February 15, 2019 at Reflections Memory Care Center in Carterville, Illinois. He was born December 17, 1921 in Springfield, Illinois to the late Neil H. Thompson and Viola B. Burnett. He married Doris (Rust) Thompson on July 25, 1942 in Saint Charles, Missouri. They were blessed with 50 years of marriage until she preceded him in death on September 11, 1992.

Jack proudly served the United States Army. He worked as a boilermaker making power plants all over Illinois and Missouri. Jack was a member of the First Presbyterian Church in Mount Vernon, the Illinois Landman’s Association, and the Boilermakers Union Post 363 in East Saint Louis. He was also a member of the Vienna Masonic Lodge #150 A.F. & A.M. and a member of the Jefferson County Shrine Club. Jack will be missed dearly by all who knew him.

A Visitation will be held at 10:00 A.M. until 12:00 P.M. Friday, February 22, 2019 at Hughey Funeral Home in Mount Vernon, Illinois. The funeral service will be held at 12:00 P.M. Friday, February 22, 2019 at Hughey Funeral Home with Joe Bob Pierce and Joe Bob Pierce, Jr. officiating. Full Military Honors will be conducted by the American Legion Post #141 with Chaplain Ernie Collins. Interment will follow at Oakwood Cemetery in Mount Vernon, Illinois. Memorials may be made to the Shriners Hospitals for Children.